NIREOS’ GEMINI interferometer  enables an innovative approach to broadband pump-probe spectroscopy. Thanks to the employed time-domain Fourier Transform (FT) detection system, this configuration allows you to measure the broadband pump-probe signal with a single-pixel detector and a single-channel lock-in ampli­fier. In this way, it is possible to combine an ultra-broad spectral coverage with an extremely high sensitivity, due to high frequency modulation (in the MHz regime) and detection. 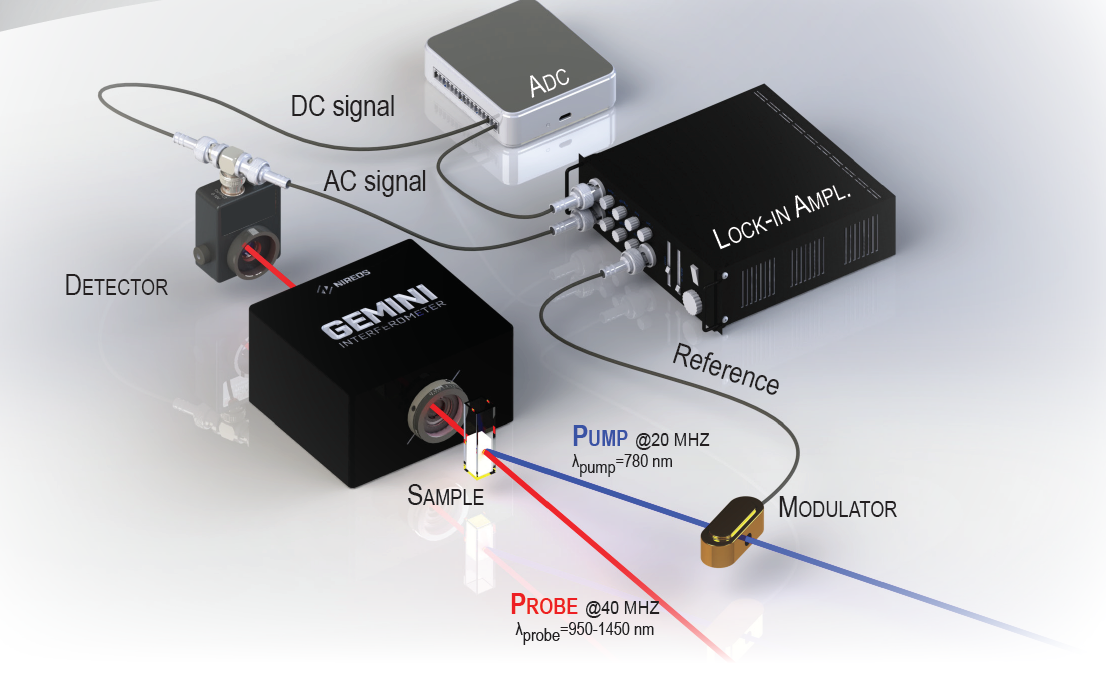 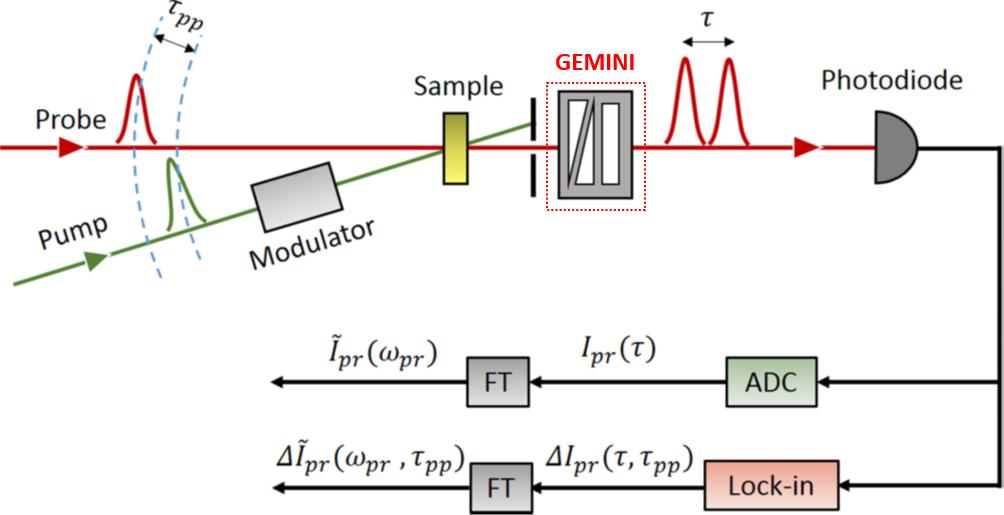 The pump and probe beams are focused on the sample in a non-collinear geometry. After the sample, the broadband probe is sent to the GEMINI interferometer, which creates two collinear replicas delayed with a variable delay t. The two replicas are sent to a single-pixel detector, where they interfere giving rise to an interferogram as a function of their relative delay t. The output of the single-pixel detector is sent to a high-frequency lock-in amplifier. An analog-to-digital con­version card (ADC) simultaneously records the demod­ulated signal from the lock-in and the output of the detector. The Fourier transform of these two waveforms correspond to the differential transmission spectrum ΔT and the linear transmission spectrum T of the sample as a function of wavelength λ. The pump-probe signal is then retrieved by computing the ratio ΔT/T.

By scanning the pump-probe delay, the two-dimensional ΔT/T map of the sample (in this case, spin-coated single-walled carbon nanotubes) as a function of probe wavelength and pump-probe delay can be constructed as shown:

The great advantage of this detection scheme consists in working at high modulation frequencies, where the laser relative intensity noise is typically the lowest, thus allowing one to achieve an excellent sig­nal-to-noise ratio in a short time. This is clear by taking a closer look at the dynamics at negative delays (see inset of Fig. X(C)). The RMS noise is 2.7×10-6 employing 1.5-second integration time. Moreover, being based on a single detector and lock-in amplifier, this system is less expensive and complex than other implementations using a detector array connected to a multichannel lock-in.

Want to know more? Contact us and we will be delighted to have a chat with you to answer all your questions!