The broad spectral coverage in the NIR-MIR band and the high sensitivity of NIREOS’ SPECTRE make it the ideal device for plastic films characterization. Thickness measurements and real-time monitoring can be performed during the production phase of plastic films, allowing high reproducibility of the manufacturing process as well as reducing waste of material.

In Figure 1 the experimental setup for plastic films characterization is shown. The employed light source is a common 50 W halogen lamp, connected to a stabilized power supply. The emission spectrum of the lamp is similar to a blackbody radiation with T=3000 K. The light emitted by the lamp illuminates the sample, which is placed at 1 meter from the lamp. The light transmitted by the sample is then sent to the SPECTRE in free space propagation, without the need of any lens nor optical fiber. In 1 second measurement time, the spectrometer measures the spectrum of the light transmitted by the sample. SPECTRE is connected via USB to a laptop, where the software provides data analysis and visualization.

Figure 2 shows the transmittance spectra of two different kind of plastic films of approx. 10 micron thickness: a composite of polyolefin and nylon (black curve) and a simple polyolefin (red curve). One can clearly identify the two different plastic films by looking at the strong absorption band in the 3 – 3.5 μm spectral region: while the red curve shows only one strong absorption peak centered at approx. 3.5 μm (associated to polyolefin), the black curve shows also the contribution of nylon, characterized by the absorption peak at approx 3 μm. 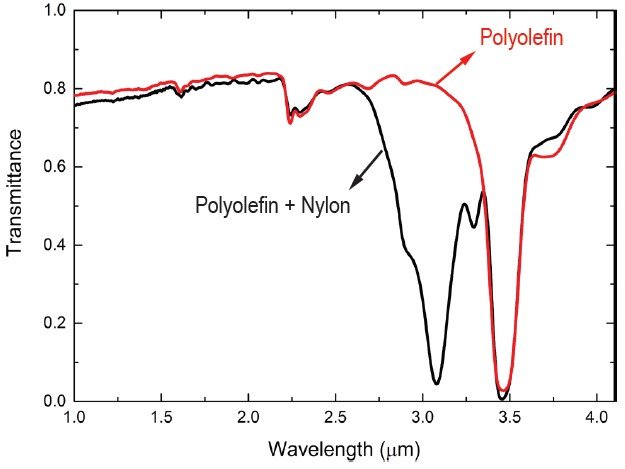 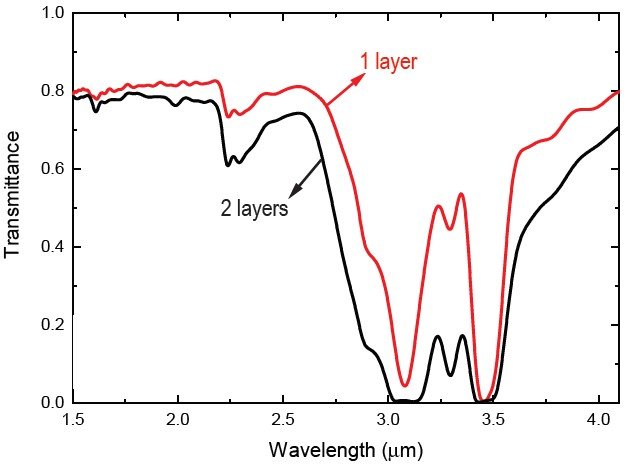